I was abroad for the weekend, having a break, which seems only fair as there was no real half-term to speak of for me. I took my manuscript with me but spent most of my spare time walking around the Eternal City, to be honest, although I did sketch ideas here and there for the viola piece, which continues to come together. I now need to dive into some solid work, though, for I have some lecture notes, arranging and rehearsing to do alongside my composing, all to pretty tight deadlines. I need to get straight back into the saddle.

I also need to sort out my current financial turbulence, to find out whether it is simply due to some late payments or to a general southward dip since I gave up teaching. There have been so many other factors involved over the past few months – building works, new ovens, tax bills and so on – that it is hard to tell what the genuine underlying trend is. The sums all work out time and time again, but…

I am very pleased with the structure of the viola piece as currently planned. As I have mentioned before on the blog, it is based on the layout of Bach’s motet Jesu, meine Freude, although with the edges and repetitions so shaped as to make them as smooth and intuitive as possible. Thus far what there is of the writing is largely a single line, so it is early to be making value judgements, but I have a good feeling about this piece, and feel that, from what is provisionally a single movement, something larger might emerge.

I cannot start arranging until Thursday, once I have my hands back again on the music I gave away, but I am optimistic of getting it done in relatively short order. It is one of those projects which could be either very large or quite compact, but there is no real way of telling until I start to get to work on it.

It is back to the manuscript today with a vengeance, finally, with some lecture notes thrown in as a side dish, and I am looking forward to it. In the evening the Parliament Choir will get another bite at Of All Persons And Estates and Ar Hyd y Nos, neither of which I think needs too much work, but both of which need to remain fresh. Towards the weekend the JEBO machine will also be grinding into gear. We have three concerts coming up in close order, two down in Bristol, including a support slot at the Colston Hall, and the one at the HMV Apollo, along with a production rehearsal to make sure that we do not make fools of ourselves. It has been a while since our last gig at full strength, so it will be fun to brush away some of the cobwebs. 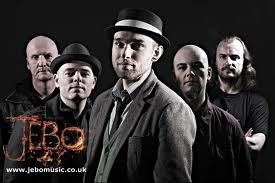 JEBO. Coming soon to a venue near you (if you live in London or Bristol).

Musically, then, all is well and ticking along nicely, with the first performance of Peace, My Heart lined up this weekend to boot. Now if only I could sort out what is going on with my cash flow I might begin to believe that this composing malarky could actually work in the long run.