I pulled off that rarest of things yesterday, an honest day’s work, sitting in front of my computer screen for a goodly part of the day transcribing the vocal parts for the Parry arrangements into Sibelius. This took longer than I thought, notes, text, dynamics, attack and so on, and also a little bit of rewriting. There is a wealth of public domain material available on the internet but much of it is nastily inaccurate, and the copy I was working from had some major errors, as well as spelling ‘coloured’ as ‘colored’, something I am fairly sure Milton never did.

Once the score was complete I needed to extract the vocal parts and then create sound files for the performers to use in rehearsal. One of the great beauties of Sibelius is that it comes with its own sound mixer, so I was able to place each choral voice in one speaker and the orchestra in the other, a little touch which will hopefully lead those who asked me to do this arranging to come back and ask for more in the future. I think that the score is pretty accurate, and that, although my hourly rate is fairly decent, you get product of a moderately high quality in a relatively short space of before time. Also ahead of deadline.

It looks like being another full day of work ahead, although I am keen to go out tramping at some point soon, get on my waterproofs and walk across a bit of England. I need to get started and hopefully well into another set of arrangements for Korea, 65 pages of music in all, as well as putting together a set of programme notes and a set of lecture notes for Monday. I think that Saturday might well turn out to be my tramping day, so I need to put the hours in today and tomorrow, but thankfully it looks as though the only impediment to that will be my own laziness.

JEBO swing into action again next week. We’ll be playing at The Bedford in Balham, one of my favourite venues. The people there are decent, know what they are doing and tend to bring in an audience, which is pretty much all you need as a band. If anybody happens to be around London on the 3rd, please do pop along. Best of all, you do not have to pay to get in and the pub is attached to the venue, so, once you’ve had enough, you can simply pop next door and drink your troubles away. 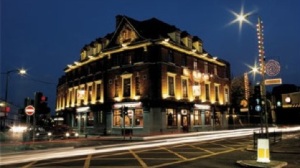 The Bedford in Balham. A great venue for artist and audience.

We received a slightly backhanded review recently as well, one of those bits of scribbling which makes you wonder whether the writer was at the same gig. It says that our Apollo set was full of ballads (it wasn’t), that we have an album out (we have two) and that our claims to be proggy are wide of the mark (we’ve never claimed to be proggy – why would we?). Most heinously of all we are compared to Del Amitri in a manner which is presumably meant to be negative. Well, anybody worth their salt knows that Del Amitri were one of the finest bands out there for many years, at least until they gave up the ghost with that last album, and that Justin Currie is the voice for an entire generation of slacker (currently) fortysomethings. If you’ve heard Del Amitri before and dismissed it as light pap, then you have not been listening hard enough. Like Elvis Costello’s Veronica, the sound of a cheery little ditty usually hides dark and perceptive sentiments to those prepared to listen to the words, and Currie has continued this on his solo albums. Listen to the track No, Surrender from his first solo effort for a biting critique of the society in which we live and you’ll realise that what one particular eunuch in a brothel intended as a slight is in fact a compliment of the highest order. 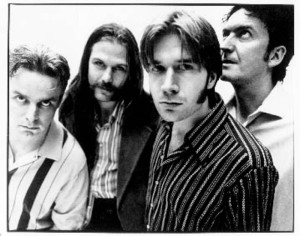 Lastly for today a shout out (as I believe it is called) to Laura, one of my favourite people in the world, the daughter of two of my other very favourite people in the world, all three of whom insist on living resolutely on the other side of it. Technology is a wonderful thing for arranging music and sending it to, say, South Korea, but some people are still too far away. Hope you have a good one.

Me and a friend.