Another busy day on Sunday, but with two excellent performances of my work in the morning, led by Mark at St. Mary Abbots. The revised St. Mary Abbots Jubilate made its first appearance, and sounded pretty good, and the Missa Seria was the Mass setting. The reaction was positive from singers and congregation alike, more performances to add to the list, which is no bad thing.

I then taught one of my private students and drove to Guildford to take a rehearsal for the Occam Singers. We spent most of our time working on the madrigals for our summer programme, and things are beginning to sound polished, so if you fancy some lighter musical fodder on the evening of July 8th, please do come along to our concert. There will be drinks afterwards.

The day was given extra shine by a wholly unexpected Ferrari victory in the Grand Prix, Alonso coming from 11thon a circuit where, so they say, you cannot overtake. Admittedly, Vettel would have won had his Red Bull not run out of Red Bull, but you take your opportunities where you can find them, and, as any fule kno, Alonso only needs the vaguest sniff of blood to be a danger. 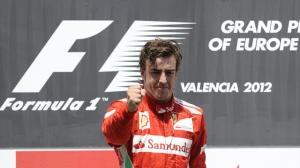 If nobody else wants this race, I’ll have it, thank you very much.

In the evening Italy went on to knock a lacklustre let’s-see-if-we-can-luck-through-on-penalties England out of Euro 2012, which will at least keep the level of drunkenness on public transport down to reasonable levels over the next couple of weeks.  It is never a good idea to rely on luck.

Wimbledon starts today as well, and one of my favourite summers was nearly twenty years ago when I wrote and wrote and wrote while the tennis commentary carried on in the background. I hope to do the same for the next fortnight, and the advantage of living in south London is that I have about three minutes from when the covers come on to get my washing in. Only rarely have I ventured onto the tennis court in anger, but I often surprise my opponents when I do, and I vividly remember shocking my cousin once by giving him a sound thrashing, something the rest of my extended family did not expect either. I love the psychological battle of the whole thing and the way you can tell immediately when somebody has given up. Watching Goran steam to victory over ten years ago was a lesson in what you can do if you believe you can. 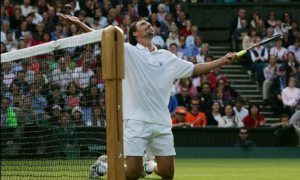 Ivanisevic. Went away, reinvented himself, won Wimbledon as a wildcard. Watch and learn.

I enjoy my boardgaming, and I enjoy following certain sports. To succeed in any endeavour one needs to have focus, drive and commitment, but, at my time of life, it is important also to keep things in balance. Whether practising a scale or a forehand smash, those who put in the time and effort will have enough of a balance of experience in the bank to ride out most of the ebbs and flows of fate. As in all things, talent will get you so far, but hard work is the binding ingredient which brings it all together.

The same applies to composing of course, and there is plenty for me to be getting on with this week. I need to finish Everyone Sang, get most of my introductions for Anghiari written, and start a new piece or two along the way. I also intend to have time to sit out in the garden and do proper things as well, but I am enough on track with most tasks not to be feeling stressed. 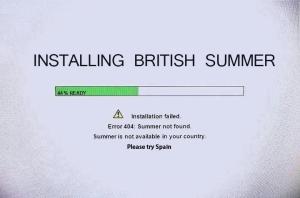 Once this eventually loads up I’ll be in the garden.

Next up on the compositional front are the performances of Ar Hyd y Nos and Mairi’s Wedding at the Commonwealth Carnival on the 2nd July, swiftly followed by the first performance of Festive Voluntary, and then outings for Military Medley, Missa Sancti Nicolai and Through The Fair over that weekend. This is no time to sit back and relax, however. I need to redouble my efforts, for I feel that the pendulum is slowly swinging in the right direction as we come up to the end of my first year of freelance writing. Like Fernando and Goran, I don’t want to have to be asked twice to take an opportunity.