If there is one thing better than listening to Finzi’s Clarinet Concerto in the grounds of a Tuscan castle on a summer’s evening, it is hearing it twice, rehearsal and performance, and such are the opportunities afforded to those who are involved in keeping the gears of the Anghiari Festival running. I am slightly hesitant to count myself in that august number given that there are many here who are working much, much harder than I, especially as I am currently sitting outside Bar Baldaccio enjoying my morning macchiato while others are probably ferrying parts, players and instruments along the many roads which criss-cross this area. All the same, this is a working week for me, and the lack of blog entries recently may be taken as testament that this is anything but a freebie with a few concerts thrown in. 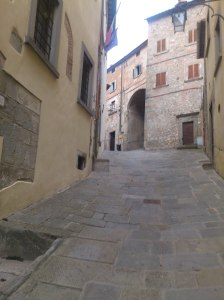 Most of Anghiari lies uphill.

My strategy of doing as much of my work as possible before coming out here has served me well in 2012, meaning that changes can be dealt with easily and efficiently without any danger of tipping me over the edge into some kind of stressy meltdown. I just breathe deeply when the notes for a piece I spent time and effort researching are no longer needed. Even though today is technically a day off, I still have much to do – arranging, writing introductory notes, a concert to introduce. There was something else I wanted to do as well, what was it? Oh yes, composition.

The view from the bridge as I pretend to be a harp.

Being around and sometimes in the middle of Southbank Sinfonia as it plays is an educational experience sans pareil for a composer, and one that money cannot buy. Listening to the interplay of the strings in the Finzi, or the dazzling use of the orchestra in De Falla’s El Amor Brujo, or the colours of various combinations of winds and brasses in a Donizetti aria is all fuel to the fire, ideas tucked away for future use. Hearing all this music in such a short space of time also makes me want to unleash myself from the strictures of too much worry about how my music might be perceived, just to get on and write it, in other words. 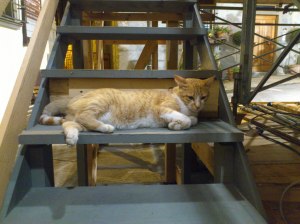 A backstage interloper at the opera gala concert.

The atmosphere here is extraordinarily friendly, people welcoming us with limitless supplies of hospitality and food and drink. Platters of food are miraculously refilled when one’s back is turned, and that is no mean feat when there is a ravenous orchestra of twenty-somethings desperate to be fed. There are familiar faces everywhere, from Fernando at Bar Baldaccio (privately I believe that he only opens for the Festival, using the money earned to sit on a yacht for the rest of the year), to the folks at the Pro Loco and the friends of the orchestra who follow us here every year. 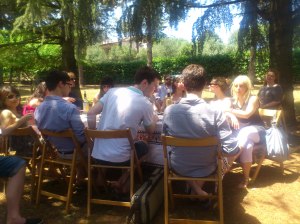 I am starting to receive ripples of applause when I take to the stage to give my introductions, which makes me chuckle, and yesterday morning I was subjected to an interview by one of the BBC’s heavyweight political hitters at a friends event, talking about the week ahead and how important the whole Southbank experience is to the players. People said that they closed their eyes and imagined that they were listening to Radio 4. I longed to say “I think the question you’re trying to ask me is…” but out was outfoxed by my wiley interviewer who used words such as “diaspora”. 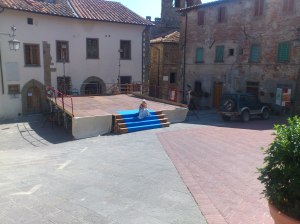 The loneliness of the long distance violinist.

Of the musical highlights thus far, the Finzi (which I adore) has been something to remember, beautifully played by one of the SBS clarinettists, also the slow movement of the Debussy quartet, which sent everybody away buzzing. This morning the talk is all of Jan Dismas Zelenka, whose Miserere we heard last night, a forgotten masterpiece of the Baroque. It is all genuinely exciting. 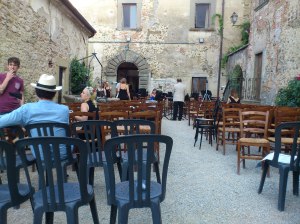 There is always the next concert to prepare.

In the time I have written this entry I have gone from sitting on my own to being in a group of sixteen, all linked with the Festival – players, singers, organisers, locals. Everybody is cheery and as sunny as the weather. Music is such a wonderful thing, although being away from the British summer clearly helps.