Every now and again one encounters something unexpected in a performance.  I have been introduced as Neil O’Reilly, struck by lightning (sort of), undergone power cuts (linked to the lightning), but never have I been the victim of a plague of flies.  Ischia in the late afternoon sunlight was simply beautiful, as you can see below, and the only real surprise at the start of yesterday’s performance of Onegin was the very high humidity.  Oh, and the fact that my piano stool fell to bits just before the start of the performance.

Sorry, London. Had Wordsworth seen this, things would have been different.

Half way through the first act, though, I noticed three flying ants on my music.  Pretty much par for the Med, and maybe attracted by my music light, I thought.  I considered turning it off, but wait, now there are five, ten, twenty…hundreds!  They were on my music (many of them still are, though no longer alive!), on my keyboard, on my clothes, in my hair.  Tatiana and Onegin were romancing each other downstage swatting away as if they had fleas, and it was difficult to know whether to laugh or cry.  Only towards the very end of the act did the swarm subside, and I spent the first five minutes of the interval wiping dead and soon-to-be-dead flying ants off my keyboard.

Things were even worse on the other side of the stage, though.  Below is a picture of James’s timp before he wiped the dead insects off.  As I sit here writing this I can hear the frogs, residents of La Mortella singing away, as they did during the second half of the performance.  Flies?  Frogs?  What next, locusts?! 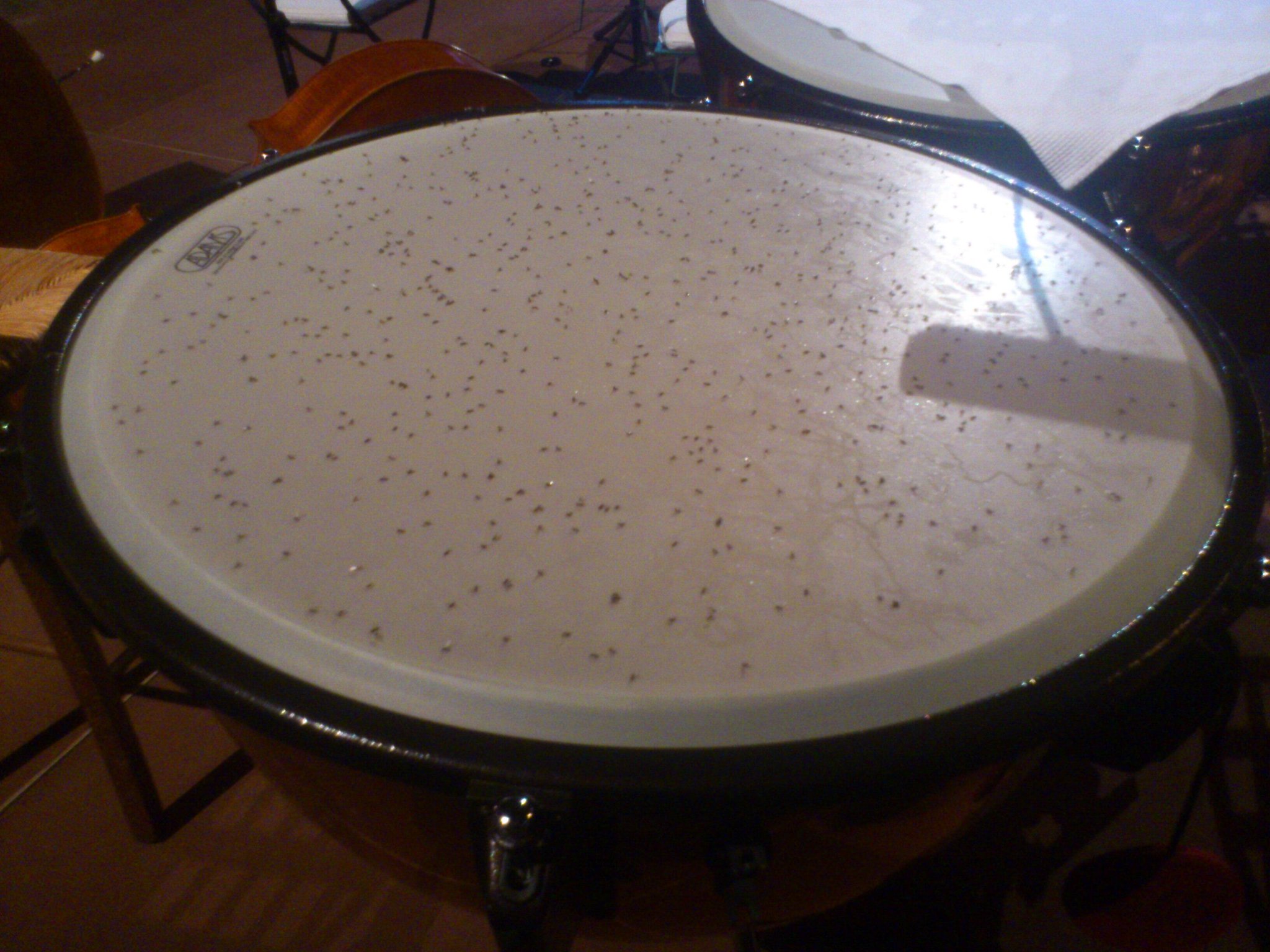 I spoke at length yesterday evening with the two clarinettists who are to perform my Suite For Two Clarinets next Tuesday.  Despite now being A Composer I still have not fully grown into the role, and I always find it slightly surprising and then (very shortly after that) immensely gratifying to realise that I am considered as such.  We are going to work on the piece prior to its first public performance, and they seem to be especially taken with its Sarabande.

I also did that thing yesterday where I get all enthusiastic about composing and hold court about harmony, melody, what music should be, what composers should do, how music should communicate.  In my defence, your honour, I do not plan these things, but they just seem to happen.  I am aware, though, that once I start I can be very difficult to stop, but people do seem to be genuinely interested.  After I had finished my exposition yesterday, however, it dawned on me that I had been talking about an opera proposal I have written with somebody who happens to own an opera company, something genuinely unplanned.  Even if, as is most likely, nothing comes of it, it was still quite a decent piece of unplanned and instinctive marketing.

So today we head to Anghiari, a long, tiring and hot coach ride up through the heart of Italy in the middle of the summer, and then straight into rehearsal.  There is plenty of time on the coach to get things done which, for me, is going to mean working on the Exeter piece.  The addition of a new chunk of text has really brought the piece to life, and I am hugely keen to start getting those ideas down onto paper, ideas I explained to my captive audience tonight!