Well, so much for promising to do some writing yesterday.  In the end the emails started arriving thick and fast, enquiries about 1215: Foundation Of Liberty, Flyht and the news that Music will be performed by the Occam Singers on 5th July, a piece commissioned by and written for them.  That’s good news, a group with which I was associated for fifteen years, and it is sad that I am otherwise engaged that evening so cannot be present.

It took longer than expected to clear the decks, especially when some other administrative things were thrown into the mix, but at six or so I downed tools and did a little gaming, losing twice at Seasons, despite playing well, I thought.  Lovely game, complex on the surface but actually simpler than it looks, even if the mechanics of it all are deeply intertwined.  Then, approaching nine o’clock, we went for a walk in the fields, the first time we have been out there for a while.  There were buttercups, cow parsley, birds aplenty and even a rabbit or two looking out for errant humans such as ourselves.  I only had my phone with me, but managed to snap the following, which at least gets close to what I wanted to preserve. 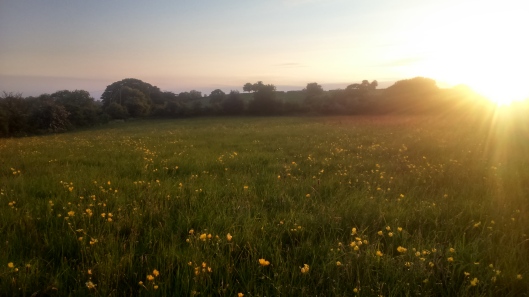 On the way back we bumped into a couple of neighbours who have since moved out of the courtyard but only a short way up the road, and we sat on our terrace, now bedecked with plants, putting the world to rights while also helping the New Zealand wine economy just a little.  It was a fine way to spend an evening.

Today has already been busy on the wires, although I have managed to get up to market and back to stock up on some niceties.  As for the rest of the day, well, more emails, no doubt, but hopefully a little bit of writing and perhaps some relaxation as well.  This is, I think, the calm before the storm as far as Runnymede is concerned, and I have done as much as I can to make sure that things run smoothly on the way in, but there will be things to do.  Best to be ahead.